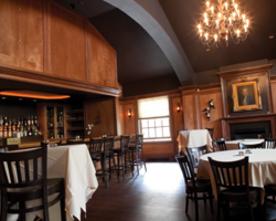 The original log cabin building that now houses The Log Cabin Restaurant was built in 1929. It was built out of oak logs from the surrounding Lehoy Forest on a site once occupied by the Nanticoke Indians. During the years when the “manufacture, sale or transport” (but, significantly, not the “use or consumption”) of intoxicating liquors was prohibited by the 18th Amendment of the Constitution and the Volstead Act, it operated as a “Speakeasy.”   No one knows exactly who the Cabin’s patrons were or how it operated during this period; but we do know that many speakeasies tried to avoid breaking the law by selling customers “set ups” (ice, glasses, pitchers, mixers, condiments, etc.) and then providing “complimentary” alcoholic beverages as a courtesy. Other establishments called “Blind Pigs” sold tickets to see an attraction (like a blind pig!) and then gave the ticket purchasers free beers to go along.

Despite these efforts to circumvent the law’s intent, police raids and arrests remained a concern. Hence, speakeasies typically hid themselves from view, behind peephole doors, in downstairs rooms, and in remote areas like the Lehoy Forest. The Log Cabin’s location in a forest surrounded by Amish farms may have helped it stay clear of the law and prosper during this era. According to its original owner, Chet Leicey,  booze was stored under the wooden booths that are now in the Booth Room just in case the police happened to show up unexpectedly.

When the Prohibition ended with the adoption of the 21st Amendment in 1933, the building was turned into a restaurant that operated continuously through the remainder of the Depression and during World War II under the stewardship of the Leicy family.  By 1961 it had caught the eye of a young man named Charles (“Charlie”) DiSantis. Charlie loved cooking and art, and he saw the restaurant as the perfect opportunity to pursue both interests simultaneously. Using all the resources he could pull together at the time, Charlie purchased the property from the Leicys and embarked on a fifty-year project that saw many expansions and innovations along with an ever-growing collection of art. Most of the early portraits and other works from this collection remain for the enjoyment of restaurant guests, including copies of several master artists, some painted by Charlie himself.

The Log Cabin is located in the “heart” of the Pennsylvania Dutch farmland just above Zook’s Mill Covered Bridge, one of Lancaster County’s famous covered “kissing-bridges” that, according to Pennsylvania Dutch legend, bring health and good-luck to those who kiss under its rafters. Also known as Log Cabin Covered Bridge, Zook’s Mill Covered Bridge carries Log Cabin Road over the Cocalico Creek near Log Cabin Road’s intersection with Rose Hill Road. Built in 1849 by Henry Zook, it is one of Lancaster County's oldest and strongest covered bridges. Unlike many other covered bridges at the time, it withstood Hurricane Agnes in 1972 despite being filled with 6-and-a-half feet of water. Among other things, the bridge was a filming location for the movie The Boys from Brazil, starring Gregory Peck in 1978, and in 1980 it was placed on the National Register of Historic Places.

But in 2008, the bridge was shut down for repairs, and that triggered Charlie DiSantis’ decision to close the restaurant and retire. Two years later, he sold the restaurant together with the surrounding buildings and property to a partnership owned by Kirk and Pam Liddell and their four adult children. The Liddells were committed to restoring the Log Cabin’s great food and unique charm to the Lancaster community, and to do so they engaged experienced restaurant operators, a local couple who first met while working for Charlie at the Log Cabin, to operate the restaurant. They were successful in bringing the restaurant back to life and sustaining it for six years as a high quality fine dining establishment. When their lease expired in late 2016, Kirk and his family reengaged with the business, with the goal of expanding the customer base and taking the restaurant to a whole new level of excellence. 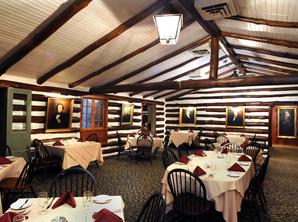 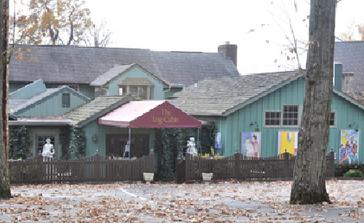